Discover the beauty of the Costa de la Luz

Costa de la Luz, one of the most famous Spanish Costas, is known for its warm climate, charming people and natural landscapes that would leave anyone filled with awe.

This costa is located in the Spanish southwest, within the southern community of Andalusia, it spans from Tarifa to the Guadiana river, and it covers the coasts of both provinces of Huelva and Cádiz. One of the things that separate costa the la Luz from the rest of the Spanish Costas is the fact that it does not border the Mediterranean Sea, instead, beachgoers will enjoy the waters of the Atlantic Ocean.

Weather-wise, this Costa is much like other southern locations in Spain, with very hot summers that can get up to 28 degrees Celsius (82 Fahrenheit) and mild winters that go as low as 9 Celsius (49 Fahrenheit), and with almost 12 hours a day of direct sunlight, and around 6 rainy days throughout the whole summer, this will make it a fantastic beach-visiting experience. Have a look at our weather infographics for the top 20 Spanish cities, with for instance Cádiz. You will get detailed monthly statistics on any month of the year. 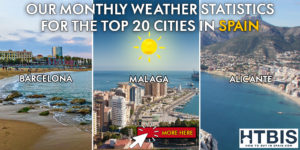 Nonetheless, beaches are not the only highly enjoyable places to go to in this wonderful place, there are many golf courses, kitesurf facilities (that go along perfectly with the winds of the Atlantic Ocean), a plethora of restaurants and Spanish style bar/cafeterias, as well as shopping malls in Cádiz and Huelva. Play with the best golf club sets in Spain thanks to our local partner.

The biggest and most populated city in the surrounding area is Sevilla, one of the most visited Spanish cities, full to the brim with museums, monuments, natural parks and as many activities as you are willing to try out. 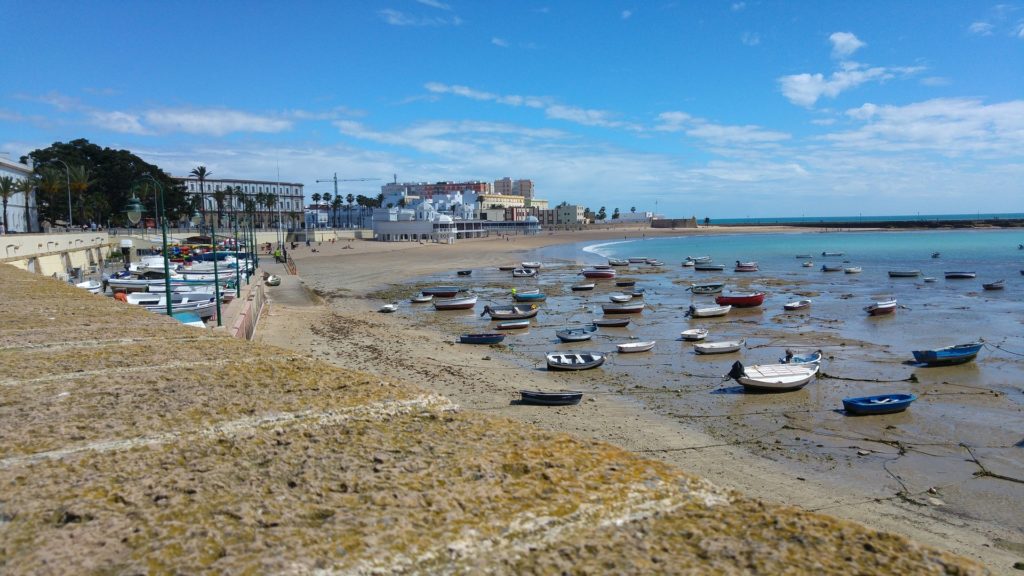 The beachfront of Cadiz

Inside the area of Costa de la Luz, we have three major cities, Ayamonte, with 200.000 inhabitants, Huelva with 150.000 and Cádiz with 120.000, unfortunately, only Cádiz has an airport, and the next nearest one is in Sevilla.

As for transport and infrastructure, since the development of the area has been fairly recent, the transport infrastructure in the area is much less developed than, say, Valencia or Madrid, and as such there aren’t as many options regarding public transport. So, if you want to have the freedom to go anywhere at any time, the best thing you could do is use the rental car services.

Costa de la Luz is also a historically rich location, as is most of southern Spain, its history dates back to the 12th century BCE, and there are monuments built around the ruins of antique Roman cities, dating back centuries. Christopher Columbus also has a deep connection with these lands, as was the case for the Pinzón Brothers, an important local family, the ones who helped him get his three ships and take sail towards the discovery of the new world.

Planning to invest in the real estate market of the Costa de la Luz?

In the last few years, Costa de la Luz has experienced very sharp growth in touristic appeal, it had always been famous amongst vacationing Spaniards, but it was the international attention that brought life to this area since the area is now very commonly visited by French and German tourists.

Nonetheless, economic growth has not been the only thing that the sharp increase in tourists brought. The prices of housing and the real estate market, in general, started to stabilize in the area as a consequence, which is great for property owners, but It also means that investors all around the world wanted to buy properties and as a result, the value of properties is now higher.

At the same time, rental prices in the area also went up, faster than people thought they would, and also faster than the tourist’s money could come, this meant a rise in prices all around, which has brought up complaints among the locals.

Although the economic concerns have not been in any way small, they have not been the only ones, as the increase in tourism has also raised environmental concerns, this is due to the rapid expansion of the urban areas, which has been accelerated by the speculation in the real estate market, causing several instances of environmental aggressions and bad practices that put the same beaches that attracted the tourists now in jeopardy.

This has made experts in the real estate market worried about the future of the area, but the prices are still recovering, and the expansion of the urban areas is still quite aggressive. This all means that, in the current market, investments in this area are healthy in general. Still, at the same time we can see some speculation in certain specific areas and the future of tourism in the area is not yet a sure thing, maybe due to the underinvestments of the authorities.

What about retiring in the Costa de la Luz?

If what you are looking for is an exciting place full of things to do, beaches to visit and parks to go for a walk on, Costa de la Luz is a great alternative, especially because the prices for properties in the small cities of the Costa de la Luz are lower than those in bigger cities such as Sevilla, Valencia, Barcelona or Madrid.

But it is important for you to consider that, as in many highly touristic places, your life will completely change with the busy season, especially in the summer, when the hotels don’t have a single room available and the beaches look like a parade of people.

Of course, this also means that you will experience interesting changes every year, you will have a more relaxed pace in a somewhat empty city in the colder months, and then see how everything rapidly comes to life as the temperature rises. Though, if that’s not your thing, you probably will be better off somewhere else.

And if you don’t like walking everywhere, you better have in mind buying a car, because there aren’t all that many places the public transport will take you to. The only high-speed train, known in Spain as AVE, is located in Sevilla, 120 Km (75 miles) away from Cádiz, and even further from Huelva and Ayamonte. 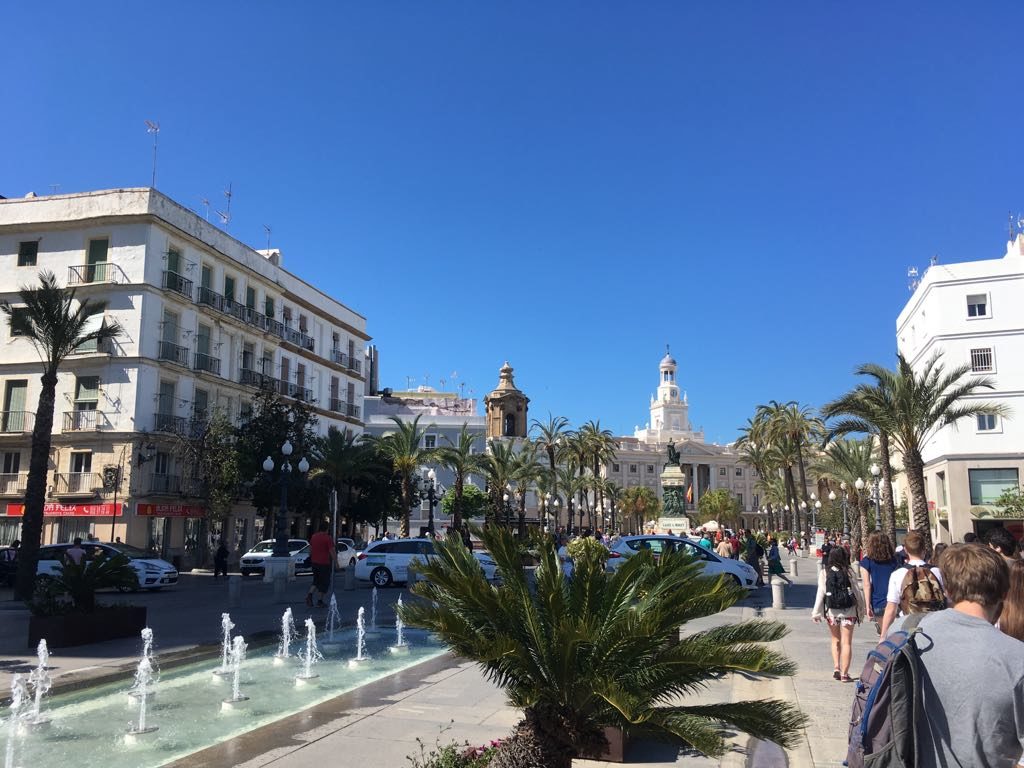 The city centre of Cadiz

Let’s start with some holidays in the Costa de la Luz?

Now, if what you are looking for is a summer house, Costa de la Luz is a great location. You have a wide range of cities and towns of different sizes very near to each other, so you get to choose what kind of experience you have, either a relaxing trip to a small town, to disconnect from reality for a while, or an exciting adventure to a major city, with tons of things to do every day.

But either way, you will have the beaches, so many beaches you won’t be able to see them all in one summer, beaches such as Playa de Isla de Canela, Playa de Torre de la Higuera, Playa de matalascañas, Playa Cruz del Mar, Playa del rompidillo, Playa la Caleta, Playa de la Cortadura, Cala de Roche, Playa de Los caños de Meca, Playa del Cañuelo, Paya de Los Lances, and the most famous on Costa de la Luz, Punta Umbría, well-known for its environmental importance, as it holds a variety of species that are endangered, but also provides a perfect place to stay in for migratory species.

Nonetheless, there are a variety of activities to be done in the summer that don’t imply going to the beach, such as waterparks and amusement parks, like Cortylandia and Aqualand Bahía, both located in Cádiz, and are especially popular among the children, in case you want to have very nice and fun vacations for the whole family.

And having a city such as Sevilla so nearby, a city that hosts so many festivals and carnivals and that is one of the main touristic attractions of Spain, there are almost no things you couldn’t do if you are ever in the unlikely event of having nothing else to do in Costa de la Luz.

Have a quick look at our infographic on Everything you could do in the Costa de la Luz and click on it if you want to download it. 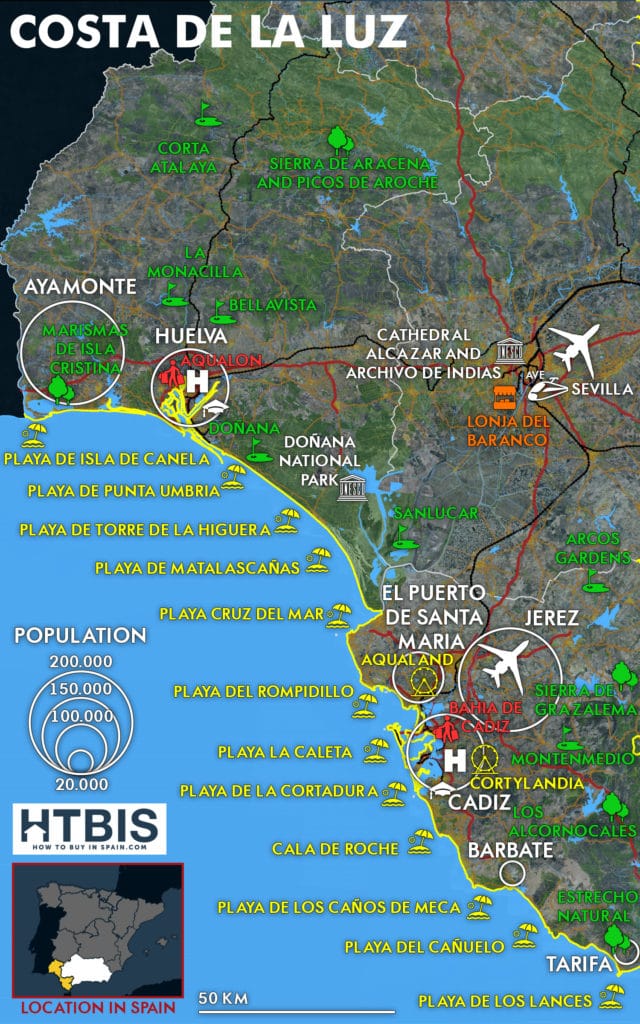 Know everything on the Costa de la Luz: its Airports, its AVE stations, its Cities and villages, its shopping places: Traditional & Flea markets, Outlets and shopping malls. What should you visit? The Unesco sites, the parks for kids, the green parks, the golf courses, the universities and last but not least the top beaches. Check out our infographic.

You will love the nature of the Costa de la Luz

To sum up, Costa de la Luz is, objectively, a great place to be in, the nature is revered and appreciated, the magnificent beaches and national parks can be found around every corner, and that has been noticed by many foreigners, too many some would say, and the sudden increase in tourism has brought negative effects on the locals and the real estate market, which is maybe rising to fast in certain regions, at best.

Nonetheless, the beauty of the place is still there, for anyone to see and enjoy, either if you are looking for a great place to have an adventure, a place to go with your family and share bonding experiences with them, or a far location disconnected from the world, or a tranquil but also exciting place to live the rest of your life on, Costa de la Luz makes for an excellent choice.

Read further on the Costa de la Luz and Spain